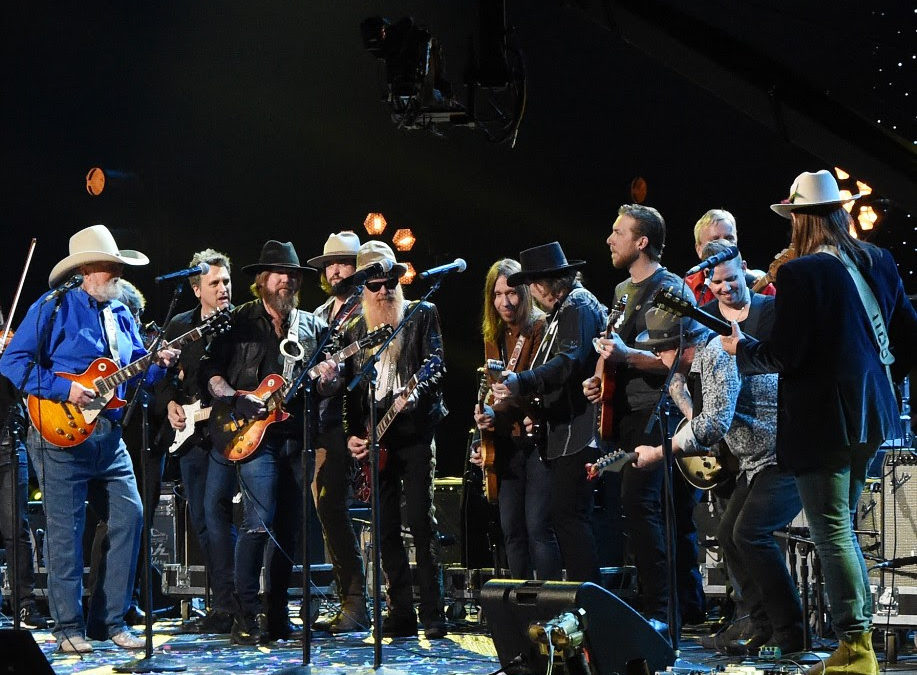 NASHVILLE, Tenn. – Just hours before entertainers such as Alabama, Alison Krauss, Billy Gibbons, Chris Young, Lynyrd Skynyrd, the man of the hour, Charlie Daniels and many more took the stage, Rolling Stone noted, “there really is no better showcase for Charlie Daniels or his namesake Band than the Volunteer Jam, the musical carnival that Daniels has kept going since its inception in 1974… The Volunteer Jam didn’t merely become an institution, it reflected how Charlie Daniels thought about his music.”

With a killer ensemble and set list of over 30 songs – from Jamey Johnson’s take on Daniels’ “Long Haired Country Boy” to Skynryd’s performance of “Sweet Home Alabama” to Devon Allman, Duane Betts and Chuck Leavell’s once-in-a-lifetime collaboration on “Midnight Rider” to, of course, “The Devil Went Down to Georgia,” a packed Bridgestone Arena witnessed over four hours of incredible music continuing the Jam’s legacy.

“Volunteer Jam XX had a kind of “specialness” about it.  The caliber, quantity and variety of talent who took the stage crossed lines, demographics, genres and styles that, while truly diverse, blended together to make for what was most likely the most entertaining Volunteer Jam in its 44 year history.” -Charlie Daniels

AXS TV filmed the concert event for a primetime broadcast special this summer; information on air date and time to be announced at a later date. Stay tuned to BlackBirdPresents.com for more details.

About Charlie Daniels
From his Dove Award winning gospel albums to his genre-defining Southern rock anthems and his CMA Award-winning country hits, few artists have left a more indelible mark on America’s musical landscape than Charlie Daniels.  An outspoken patriot, beloved mentor to young artists and still a road warrior at age 81, Charlie has parlayed his passion for music into a multi-platinum career and a platform to support the military, underprivileged children and others in need.

Raised among the longleaf pines of North Carolina, Charlie began his career playing bluegrass music with the Misty Mountain Boys.  After moving to Nashville in 1967, he began making a name for himself as a songwriter, session musician, and producer.  Elvis Presley recorded a tune Charlie co-wrote titled “It Hurts Me,” which was released on the flip side of “Kissin’ Cousins.”  He played on such landmark albums as Bob Dylan’s Nashville Skyline and tried his hand at producing on the Youngbloods’ Elephant Mountain and Ride the Wind.

His unique voice as an artist emerged as Charlie recorded his self-titled solo album in 1970 for Capitol Records.  Two years later he formed The Charlie Daniels Band, and the group scored its first hit with the top ten “Uneasy Rider.”  Since then the CDB has populated radio with such memorable hits as “Long Haired Country Boy,” “The South’s Gonna Do It Again,” “In America,” “The Legend of Wooley Swamp” and of course, his signature song, “The Devil Went Down to Georgia,” which won a Grammy for Best Country Vocal Performance by a Duo or Group in 1979 as well as Single of the Year at the Country Music Association Awards.

Blackbird’s recent concerts, broadcast specials and releases include All In For The Gambler: Kenny Rogers’ Farewell Concert Celebration, Sing Me Back Home: The Music of Merle Haggard, The Life & Songs of Kris Kristofferson, Imagine: John Lennon 75th Birthday Concert, Outlaw: Celebrating The Music of Waylon Jennings, I’ll Take You There: Celebrating 75 Years of Mavis Staples, The Life and Songs of Emmylou Harris, Lynyrd Skynyrd: One More For The Fans, The Musical Mojo of Dr. John: Celebrating Mac and His Music, and All My Friends: Celebrating The Songs and Voice of Gregg Allman, the latter of which earned a 2014 GRAMMY® Award nomination for Gregg Allman and Taj Mahal’s awe-inspiring performance of “Statesboro Blues.”

About AXS TV
Launched in July 2012 by visionary entrepreneur CEO Mark Cuban, AXS TV delivers the ultimate in music entertainment programming with an eclectic lineup that includes classic concerts from music’s most iconic bands, as well as exclusive music festival coverage, original hit series, docs that rock, insightful specials, and knock-out live mixed martial arts action. AXS TV is a partnership between Cuban, AEG, Ryan Seacrest Media, Creative Artists Agency (CAA) and CBS. The network is available nationally in the United States and can be seen in parts of Canada, Mexico and the Caribbean. For a list of providers, visit axs.tv/subscribe. For more information, see www.axs.tvand www.axs.tv/press. Follow AXS TV on Facebook, Twitter @axstv; Instagram; and YouTube. For press materials log onto axstvmediacenter.com.