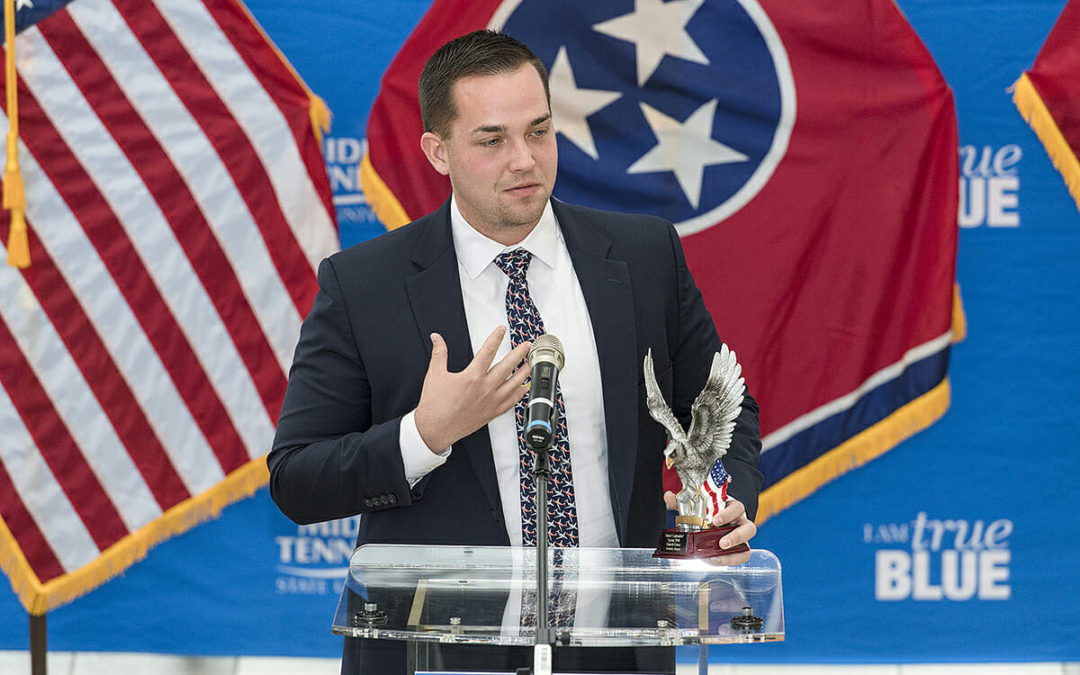 Daniel Ladendorf and Ed Russell knew they were going to receive an award during the 10th MTSU Graduating Veterans Stole Ceremony.

They probably were not aware of the first-time significance.

MTSU officials with the Charlie and Hazel Daniels Veterans and Military Family Center presented the new Veteran Leadership Award and Journey Award to Ladendorf and Russell, respectively, during the spring Stole Ceremony April 25.

During the ceremony, held in the Miller Education Center’s second-floor atrium, the university recognized student veterans not for only their service to their country but for finishing their dream of obtaining a college degree.

About 30 graduating veterans received their red stoles, which they can wear during the spring 2018 commencement ceremonies May 5-6 in Murphy Center.

Provost Mark Byrnes and Dr. Deb Sells, vice president of student affairs and vice provost for enrollment and academic services, presented the Veteran Leadership Award to the student veteran who has demonstrated superior leadership, academic achievement and selfless service to MTSU and the community.

Ladendorf, 24, an aerospace professional pilot major and former U.S. Marine Corps sergeant, thanked Byrnes, Sells and MTSU President Sidney A. McPhee, then told the audience that “there are lots of leadership experiences veterans can teach to our classmates.”

“One of my goals was to get involved on campus. I got involved in Greek life, student government, the Faculty Senate and the Daniels Center,” Ladendorf, who is from Sarasota, Florida, and a transfer student from the University of Maryland-University College, added.

David Corlew, a founding board member with The Journey Home Project who has worked with country star Charlie Daniels for 46 years, presented the Journey Award to Russell. The new award is for a student veteran who has overcome significant adversity and made the transition into an “unsung hero” for student veterans and the Daniels Center.

Russell, 55, a liberal studies major, ended his U.S. Navy career in 1994. The Christiana, Tennessee, resident said he will enter the Belmont University School of Nonprofit Management this fall.

“We’re all responsible for taking care of each other,” he said. “MTSU is very welcoming, accepting and has an inclusive nature. This is an amazing place. I’m very grateful for their patience.”

McPhee said MTSU “boasts a unique history in the role it plays in providing educational opportunities for the exemplary women and men who have so nobly chosen to serve this country by devoting their time, talents, skills and hearts to the safety, protection and welfare of its people — both home and abroad.”

“We take deep pride in giving back to you in recognition and gratitude for your selfless devotion to preserving and advancing the ideals of freedom and liberty for which this nation stands.”

Retired Army Lt. Gen. Keith M. Huber, MTSU’s senior adviser for veterans and leadership initiatives, told the student veterans their “mission and next path is to get a degree to be able to provide for their family.”

Suzanne Jene, deputy health system director for the VA Tennessee Valley Healthcare System, and Jeff Davidson, deputy mayor for Rutherford County and a retired U.S. Army colonel, were among those in attendance.

MTSU has more than 240 combined undergraduate and graduate programs.