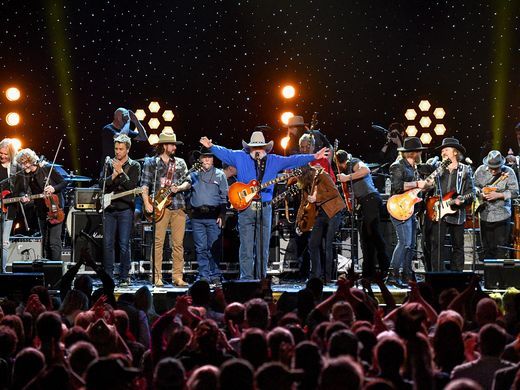 A host of artists as diverse as Charlie Daniels himself took the stage at Bridgestone Arena Wednesday night to honor the 81-year-old “Devil Went Down to Georgia” singer at his 20th Volunteer Jam.

“It’s such an honor to be here,” Moore told fans before covering Daniels’ “Simple Man.” “He’s one of my heroes in country music but a great human being.”

Before the show, Daniels said that he didn’t know what to expect. He just planned to “show up and enjoy it.”

“I like hearing people do our tunes,” Daniels explained.  “I love to hear what their take is on them.”

Over the course of the night, the guest artists and finally Daniels treated the audience to 30 songs – a mix of Daniels’ hits and the performers’ originals.

Jamey Johnson, who played in the backing band all night, thrilled fans with Daniels’ “Long Haired Country Boy.” Travis Tritt did his “It’s a Great Day to be Alive” along with “It Hurts Me,” which he said Daniels wrote for Elvis Presley. Eddie Montgomery of Montgomery Gentry sang the duo’s signature hit “My Town.”  Like Moore, Brice, Janson and Young stuck to Daniels’ greatest hits. Janson riled the audience up with “(What This World Needs is) a Few More Rednecks” and Young got fans singing along with “Drinkin’ My Baby Goodbye.”

“I used to do this one back in my bar days,” Young told fans. As soon as the recognizable fiddle lick rang through the arena, fans cheered and hopped to their feet.

Daniels said the four-hour concert was filmed for a summer documentary on AXS TV.

Regardless of the cameras, the night was still all about the music.

“I still love it,” Daniels said of making music. “I love the people I do it with. I get a charge every night of walking out on stage and entertaining people. People say, ‘Why don’t you retire?’ What would I do?  If I’m going to sit around the living room and play guitar, I might as well get paid. It’s been my life for so long, it’s hard to imagine my life without it.”

After Daniels finished “The Devil Went Down to Georgia” at the end of the show, Glen Campbell’s son Travis Campbell presented Daniels with the Tennessee National Guard Minute Man Award. Proceeds from the evening benefited the Journey Home Project.