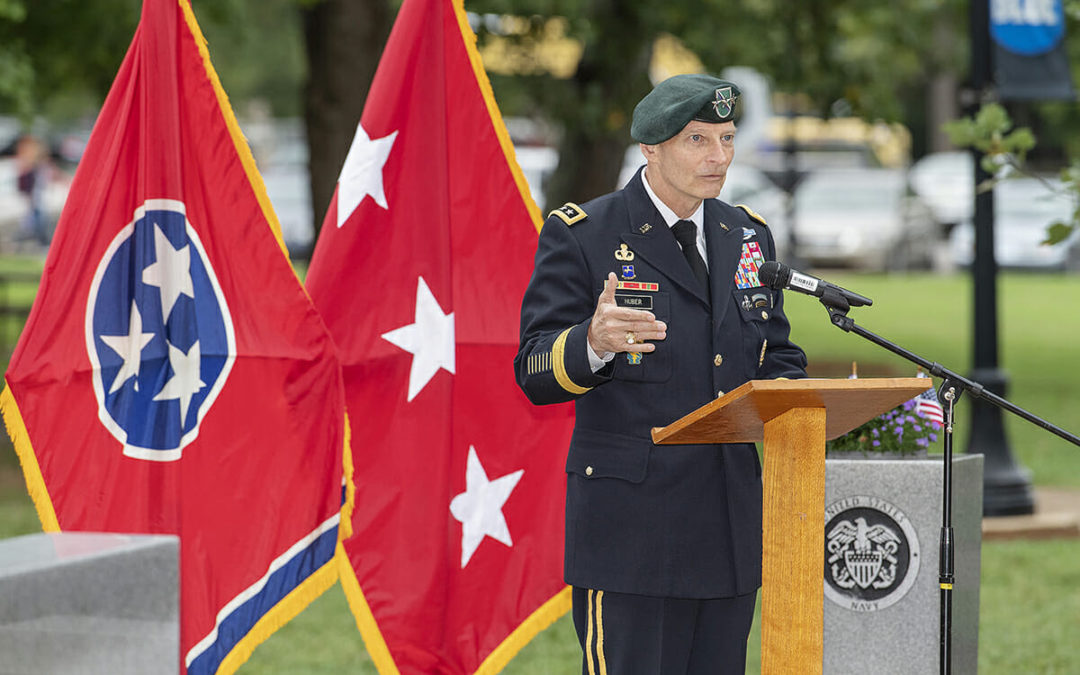 From cadets and the new Department of Military Science chair Carrick McCarthy to Gold Star Moms Tammy Bass and Jan Edens to Keith M. Huber, senior adviser for veterans and military initiatives, the ceremony recalled the events of Sept. 11, 2001, when the United States was attacked in an act of terrorism.

For the fourth year, the university and the Charlie and Hazel Daniels Veterans and Military Family Center held a public ceremony to commemorate the 17th anniversary of a series of four coordinated terrorist suicide attacks by the militant extremist group al-Qaida on U.S. landmarks.

Nearly 150 people attended the solemn ceremony. Two of those were the mother-daughter tandem of Hope and Kylee Harrison of Rockvale, Tennessee. Kylee Harrison is a sophomore graphic design major in the College of Liberal Arts and a new ROTC cadet.

While daughter Kylee was impressed with the ceremony, the addition of a Murfreesboro Fire Department fire truck ladder lifting a U.S. flag high into the air, and the appearance of more students, Hope Harrison was touched by the words of Huber and the Gold Star Moms.

“Everybody was crying like a baby, including me,” said Hope Harrison, who said she gave both Bass and Edens a hug after the ceremony.

“There’s nothing you can really say to them. … And that guy’s (Huber) incredible.”

“Six years later, we’re waiting for the world to change and waiting for peace,” she said. “One day, these terrorist events may end because of his sacrifice and everyone’s sacrifice.”

A Hendersonville, Tennessee, resident, Bass lost her son, Marine Cpl. David A. Bass, in April 2006 when his truck overturned in a flash flood near Asad, Iraq, as he served in Operation Iraqi Freedom.

“He was where he belonged, where he needed to be,” she said. “My job is to never forget, never forget the events of 9/11 and never forget what a wonderful country we have.”

McCarthy, the first-year head of the military science program and a U.S. Army major, spoke of the personal sacrifices of his U.S. Military Academy classmates, seven graduates of the institution and three of his own soldiers.

“I’m glad we are doing this to remember their sacrifice,” he said.

Huber, then a U.S. Army one-star brigadier general, spoke of where he was on Sept. 11, 2011, how he quickly realized “we are at war after the deliberate, well-planned, orchestrated attack” and how he lost friends at the Pentagon and elsewhere that day.

“This is a day to remember and a day to have reflection,” said Huber, who retired as a lieutenant general with nearly 40 years of service. Some of his final remarks — “this is the saddest sound I know” — led to the playing of taps by David Andrzejewski.

Student cadets read the timeline of the Sept. 11, 2001, events, from Flight 11 crashing into the World Trade Center North Tower, the collapses of the twin towers and the other attacks throughout that morning.

Including military science, MTSU has more than 300 combined undergraduate and graduate programs. Military science is one of 11 College of Basic and Applied Sciences departments.