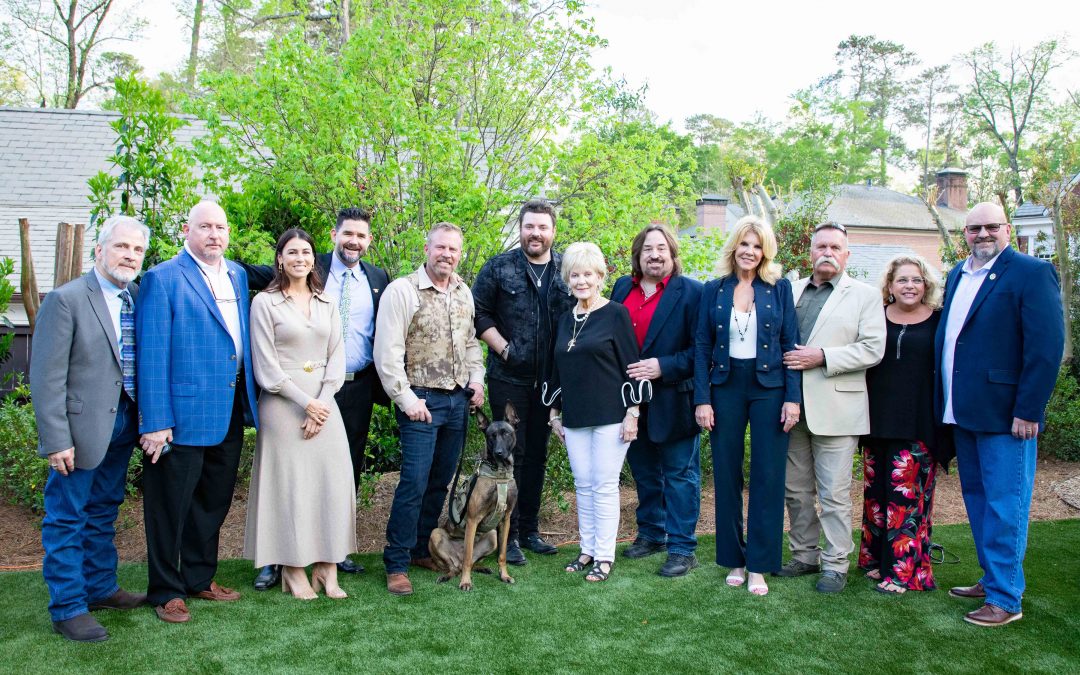 A recently held Share the Burden Dinner in Atlanta, GA, hosted by veterans’ organizations, The Charlie Daniels Journey Home Project (TCDJHP) and Shepherd’s Men, featuring a live performance by country music artist Chris Youngraised more than $300,000, including a generous donation from Young for our nation’s military heroes. The event was focused on combatting veteran suicide and advocating for TBI and PTSD.

“I’m honored to help further the missions of The Charlie Daniels Journey Home Project and Shepherd’s Men in supporting our U.S. veterans,” shared Young. “Not only have my sister and brother-in-law served in the military, but I’ve had the chance to meet so many service members on the road and abroad and I’m so grateful for their service to our country.”

Since the passing of Country Music Hall of Fame member Charlie Daniels last summer, his veterans’ organization, TCDJHP, has forged ahead with co-founder David Corlew determined to continue its legacy. Corlew says combatting veteran suicides is a major focus of TCDJHP.

“Three years ago, we created the concept of a private dinner with Charlie for a small group of compassionate people, and it was very successful,” explains Corlew, who was also Daniels’ longtime manager. “With the passing of Charlie in 2020, Chris Young so graciously stepped in this year to help us continue this awesome event. We followed all the guidelines of separation to keep everyone safe, and experienced an epic evening. We are so grateful to be a part of a shared mission with the Shepherd’s Men to fight this horrible tragedy of suicide in our veteran community.”

Since 2014, Shepherd’s Men has raised funds to support the Shepherd Center’s SHARE Military Initiative, a nationally acclaimed program that has transformed lives for more than 700 veterans and their families at no charge to veterans. This 12-week, comprehensive program provides treatment for post-9/11 veterans who have sustained mild to moderate TBI and PTSD. The Shepherd’s Men’s relationship with TCDJHP began several years ago when Daniels began partnering with the group for annual fundraising events benefiting veterans. To date, the two organizations have collectively raised significant funding for injured veterans across the nation.

“It is the goal of Shepherd’s Men to bring awareness to the condition of those struggling in our veteran community, many of whom often suffering in silence, isolating themselves from family and friends due to injuries sustained in combat. For many, the difficulty acclimating to life with these injuries is a constant struggle and can often lead to broken families, addiction and unfortunately loss of life,” said Travis Ellis, Co-founder, Shepherd’s Men. “Often, the fight doesn’t end when one returns home, as the internal struggle can be far more dangerous than conditions abroad. We are committed to raising the valuable resources required to sustain the SHARE Military Initiative at Shepherd Center while advocating for our nation’s warfighters. We will not rest until veteran suicide is stricken from the community; we are dedicated to lifting up our veterans. Our veterans and their families deserve to live fulfilling, meaningful lives after their noble and courageous service to this nation.”

In support of the cause, Daniels’ wife of 55 years, Hazel Daniels, and his son, Charlie Daniels Jr., were in attendance at the event.

“Charlie Jr. and I were honored to be with everyone as they continue to support the mission of TCDJHP and the Shepherd’s Men,” said Hazel Daniels. “Charlie always said that ‘we owe these men and women an unpayable debt of gratitude’ and working to reduce the 22 suicides a day to zero was of great importance to him.”

“David Corlew and I are eternally grateful to Chris Young, event hosts, guest speakers, Local Three Kitchen and Bar, sponsors, donors, Shepherd’s Men members, Shepherd Center, The Charlie Daniels Journey Home Project team and countless friends for their generosity and heartfelt outpouring of support for veterans and their families,” adds Ellis. “Time and time again, we are blown away by the incredible kindness of patriots who love the men and women who serve this country—and want to see them healed, whole and thriving. This event is yet another opportunity to heal the hidden injuries of our heroes.”