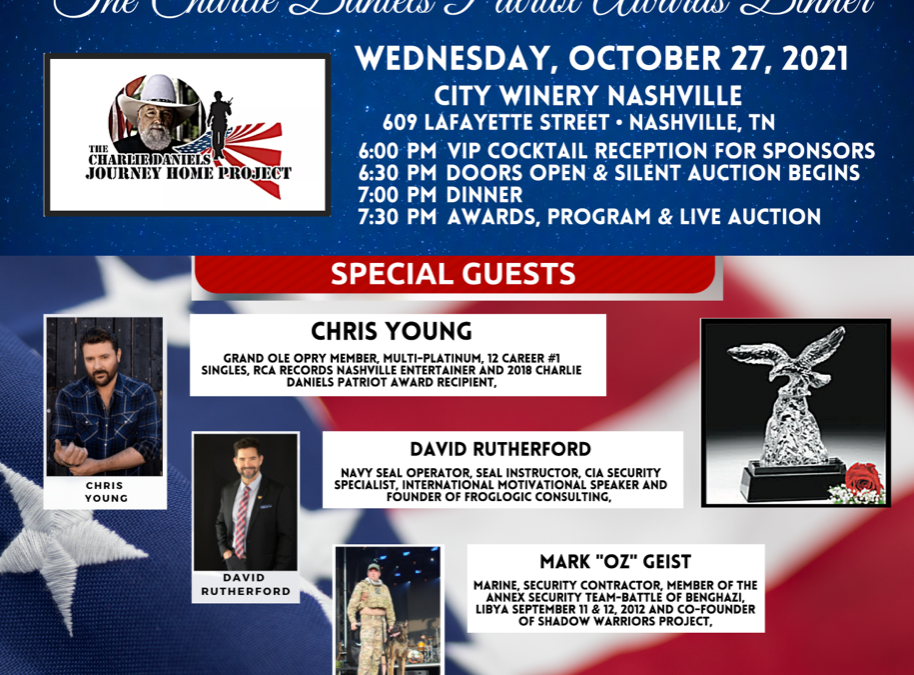 Nashville, Tenn. (Oct. 14, 2021) — Announced today, the third annual Charlie Daniels Patriot Awards Dinner will be held on Oct. 27 at Nashville’s City Winery. This year’s Patriot Award recipients include country singer Darryl Worley, decorated military veteran Mark “Oz” Geist (Benghazi survivor and co-author of 13 Hours/ US Marine Corps, retired), The Daniels Center at MTSU (Middle Tennessee State University) and firearms manufacturers Marty and Cindy Daniel of Daniel Defense. All proceeds from the evening will benefit the late Country Music Hall of Fame member’s veterans non-profit, The Charlie Daniels Journey Home Project (TCDJHP). “Winning the Charlie Daniels Patriot Award is one of the greatest honors that could ever come my way,” says Worley. “It is total confirmation that my service to the men and women of the U.S. military is righteous and good. I pray that I can always enjoy the freedom that they afford us all and live a life worthy of their sacrifices.”
Multi-platinum, global entertainer Chris Young, a previous recipient of the Patriot Award, is set to perform live. Special guest speakers will include former New York City Police Commissioner Bernie Kerik, David Rutherford (former U.S. Navy SEAL), Eddie Gallagher (former U.S. Navy SEAL) and decorated military veterans ChrisSpence and Mario Vigil, two of the “Real Horse Soldiers” portrayed in the 2018 critically-acclaimed film, 12 Strong, starring Chris Hemsworth. SiriusXM’s Storme Warren will co-host along with Rutherford. The dinner ceremony will also include a silent and live auction. “Charlie and I had many conversations regarding how we could pay respect and honor to those that crossed our paths, that go above and beyond in supporting our active military, as well as our returning veterans,” explains Daniels’ longtime manager and TCDJHP co-founder David Corlew. “The Charlie Daniels Patriot Award personifies the extraordinary acts of respect and care for those that have served this great nation. The award is a thank you from Charlie himself.” Corlew and TCDJHP board member Major General Terry “Max” Haston (retired) will also speak at the event.  Prior to his passing last year, Daniels and Corlew handpicked this year’s Patriot Award recipients. The criteria for the award is based on the mission of the organization: to support veterans in their return, rehabilitation, and reintegration back into civilian life. The award honors a person, persons, or group that fulfills and exemplifies the efforts and dedication of TCDJHP’s purpose to continuously care, support and encourage the men, women, and families who have served our great nation. Previous recipients include Young, Mike Huckabee, Jude Seale, William Horton, Donnie Mingus and The Shepherd’s Center. A limited number of tables remain available for purchase. For seating inquiries, contact Paige Dixon: 615-496-6556 / paige@leavinglegaciesfoundation.org  The Charlie Daniels Patriot Awards Dinner is sponsored by Team Construction.
About The Charlie Daniels Journey Home Project
The Charlie Daniels Journey Home Project (TCDJHP) is a not-for profit organization that assists other not-for-profits in securing funds to help causes that benefit veterans of the United States Armed Forces. The organization was co-founded in 2014 by the late country music legend Charlie Daniels and his manager, David Corlew. Board members include Corlew, Major General Terry “Max” Haston (retired) and most recently in 2020, Hazel Daniels. Conscious of the need to assist our nation’s veterans, TCDJHP partners with organizations that do the most good, with the least overhead. Working in tandem with these organizations, TCDJHP is making a difference in the lives of American patriots. TCDJHP’s daily operations rely solely on public donations.

To donate or for more information, visit thecharliedanielsjourneyhomeproject.org.